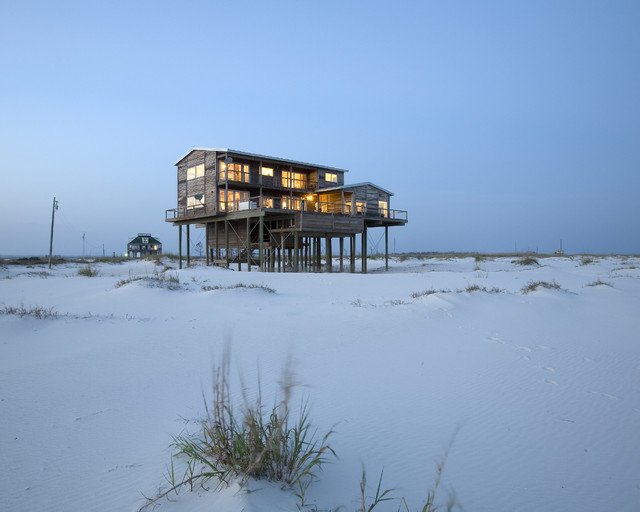 Architect John Hill writes about architecture and the ability to endure a beating from storms and flooding.  On the west coast, the biggest fear are earthquakes. As a result, architecture guidelines do the best they can to ensure a building will withstand that once in a lifetime large shaker.

But on the east coast, one expects a beating from good old ‘Mother Nature’ if you live in those zones – on an annual basis.  If one single event in 2012 had long-term consequences for the future of architecture it was Hurricane Sandy, which hit the East Coast of the U.S. in late October. Responses to climate change are finally entering the political picture, after being batted about by architects, landscape architects, urban planners and others for years. While the impact of rising seawater points to big fixes (levees, locks and the like) and questions where we build, not all responses need to be big according to Hill. This Florida island house points to one tactic: raising a building’s living spaces above high waters.

An earlier hurricane, Katrina, necessitated even more rebuilding, much of it in poor areas of New Orleans. One high-profile response was spearheaded by Brad Pitt with architects like Frank Gehry, whose design for Pitt’s Make It Right foundation is pictured here. The house is fairly subdued for Gehry, but its combination of being lifted up on stilts (not apparently high enough, given the 8 feet of water that inundated the Lower Ninth Ward, where it’s located) and having solar panels for off-the-grid power in emergencies is a good model: part historic precedent and part modern technology.