Walking on History at Memphis Riverfront 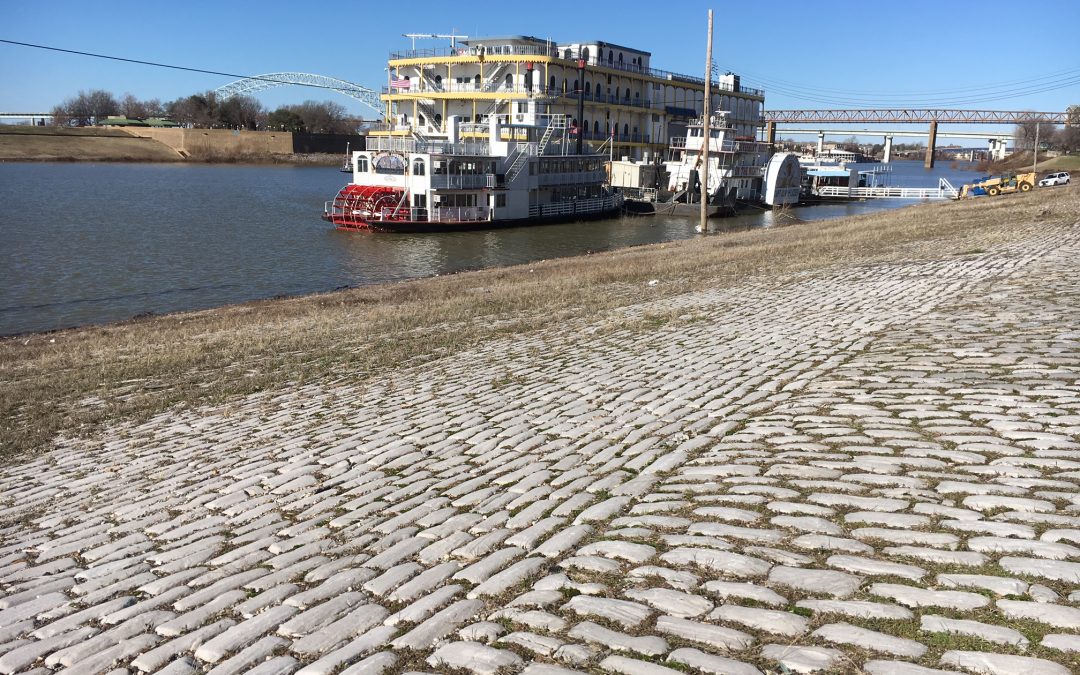 Historic Cobblestone Landing has persevered since the 1850’s!

During a recent trip to Memphis Tennessee, I discovered the wonderful historic Cobblestone Landing at the Memphis riverfront. The area is remarkable –  both due to its expansiveness and the quality of the preserved antique cobblestones, which are 80% original. There’s  an estimated 800,000 of them along the river bank between Beale and Jefferson streets. You can stroll right up to the mighty Mississippi (aren’t many places you can do that easily) by walking over authentic historic cobblestones!

For a detailed history on the area, it’s worth your time to check out the “Historic-Memphis” website which contains a vast selection of images and information. The landing was built between the late 1850s and 1890s by immigrant laborers. The cobbles were sourced from quarries in Illinois – unlike most historic places whose cobblestone may have come across the Atlantic as ballast in ships.  Before installation (between 1852 and 1891), the mud was so thick along the riverbank that it was hard for people to walk to and from riverboats. They say there were many shoes and boots found in the mud! Due to this and the heavy commerce of incoming ships which exchanged their loads for cotton, lumber, and other products, the cobblestone landing was a vital necessity and the main contributor to the tremendous growth of Memphis’s waterfront economy. The city became the world’s largest cotton, hardwood and mule market – because so many mules were used to unload the ships and take the products up the bluffs to the warehouses.

According to the Riverfront Development Corp., the cobblestones fell into disrepair over the years as they settled and sloughed at the toe. Although the Landing was placed on the National Register of Historic Places in 1979, efforts did not begin until the 1990’s to preserve and restore to full usability for boating and the enjoyment of locals and visitors. The RDC is currently working on The Historic Cobblestone Landing Restoration and Walkway Project to stabilize and restore the cobblestone field and will make certain accessibility and usability improvements.Today the Cobblestone Landing at the Memphis Riverfront is the nation’s largest remaining, in both its historic dimensions and physical composition. Well worth a visit when you’re in Memphis!