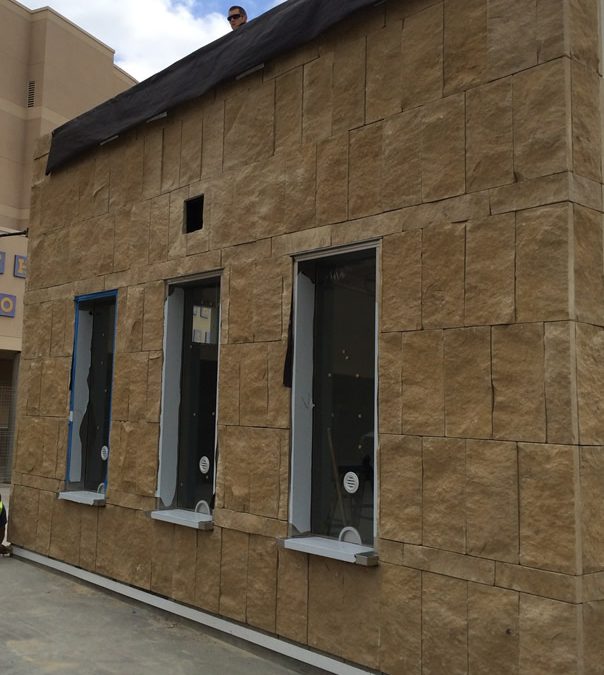 Eastlake High School in Chula Vista, CA, has a beautiful performing arts center on campus; The Ruth Chapman Performing Arts Center. The Center hosts numerous school and community activities and is the resident venue of many community performing arts organizations. The box office that was later added included a specification for locally sourced stone veneer. Santa Barbara Sandstone was selected by JRM Architecture for its beautiful color and native Southern California origin.

Santa Barbara Sandstone is unusual in that it ‘harvested’ as boulders of varying sizes in the Santa Barbara and Montecito areas of California, rather than being cut or extracted from a quarry.  Composed mainly of sand-size mineral or rock grains, most sandstone is composed of quartz and feldspar – two of the most common minerals in the earth’s crust. Like sand, it can be any color, but most commonly comes in tan, brown, yellow, red, gray and white. The Santa Barbara area sits on a geological formation which produces the famous golden or buff colored stone predominantly in boulder form. Santa Barbara Sandstone is famous for texture and workability. For over a century, it has been popular on many prominent public buildings and residences in Southern California.

Monarch Stone International offers Santa Barbara Sandstone in several products including hand fabricated ‘Rubble’ and ‘Five Point’ patterns.  Saw cutting and fabrication is available for dimensional pieces such as sills, coping, treads, flooring and full or thin veneers such as the Eastlake High School box office building.  Our ability to provide your project with this handsome native California stone, is second to none.