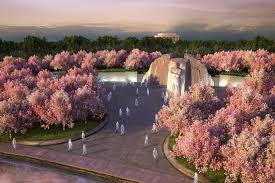 Thought we’d be blogging on the artistic rendering and craftsmanship of the granite monument, but then we discovered the controversy.  Just “Google” Martin Luther King National Memorial, and you’ll find as many posts on the criticisms as accolades.

First of all, congratulations to the U.S. design and construction team lead by; ROMA Design Group, San Francisco CA, along with McKissack & McKissack, Architect of Record, Turner Construction, Tompkins Builders, Inc., and finally Gilford Corporation. No matter how you feel about the decisions behind the monument, it is a breathtaking work of art and tribute to a great man.

First we learned that the Martin Luther King National Memorial organization chose a sculptor from China, Master Lei Yixin. This occurred after a design competition was held with over 1,900 registrants and over 900 submissions were received from architects, landscape architects, students, sculptors, and professors representing 52 countries around the world. Harry E. Johnson Sr., president of the foundation, said scouts for the foundation spotted Lei’s work at a sculpting workshop in St. Paul, Minn., and approached him. The sole criterion for choosing him, Johnson said, was artistic ability, skill at capturing personalities in sculptures, his expertise in hewing granite and his extensive experience with large public monuments.  Master Lei, aware of the opposition to his selection, had this to say; “When you see the statue of Martin Luther King, you might think of the injustices around the world, which call for our collaborative efforts . . . to bring to justice the things that King himself was unable to finish. He has always dreamed that people from all over the world will not be judged by the color of their skin — that we would all be brothers and sisters and enjoy equal opportunity. Now I have the luck to get this opportunity,” he said.

Secondly, the granite used for the colossal monument was also from China.  The artist used 159 granite blocks that were assembled to appear as one singular piece.  There is a 450-foot inscription wall as well,  made from granite panels.  The MLK group selected Chinese granite for its color and density, over American quarries located in Barre, Vermont. Crews work on a model of the planned Martin Luther King Jr. memorial in Changsha, China

The combination of both a Chinese sculptor and Chinese granite was simply too much for many who voiced their opposition.  However, considering the artists comments and inspiring words from Dr. King himself, I don’t know how we can let the country of the stone’s origin, or the artist, cloud the importance of this last monument on the national mall.

U.S. companies  in the building and stone industry are constantly competing with stone products and services being imported from China and many others.  The world is shrinking and a global economy – especially with stone,  is reality.  We have to work harder for smaller margins.  How does Monarch Stone International differentiate ourselves from both local and international competition?  Offering our clients an international selection combined with knowledge, service, quality, and competitive pricing, and educating our clients to assess all these components equally.

In the end, the MLK organization felt artistic capability,  stone color and quality could not be found in the U.S., and thats the way it is. The grand opening celebration for the Martin Luther King Memorial on the National Mall in Washington D.C. was rescheduled due to the untimely arrival of Hurricane Irene in August, and is now set  for October 16th 2011.  Wish we could be there.