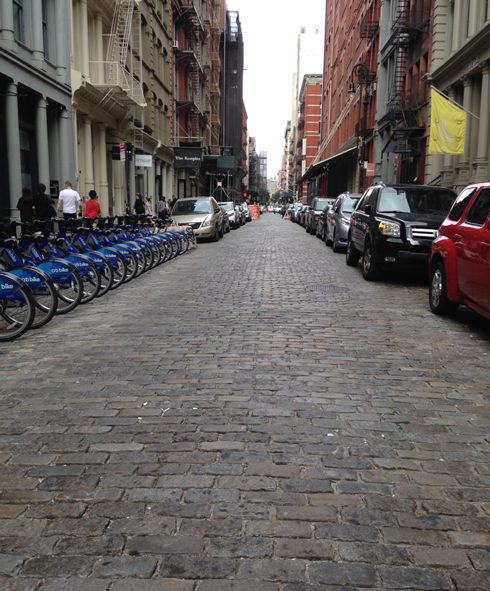 While visiting New York, I spent a sunny afternoon exploring the charming cobblestone streets of SoHo. Watching the way pedestrians, and bicyclists navigate over the authentic antique surfaces and hearing the loud clacking noise from car tires as they pass by, is quite entertaining! I’ve made it a goal to eventually visit all the areas of NYC with cobblestone streets – and there are plenty! (Read about “Dumbo“ in an earlier post.)

There was a time when nearly all of New York City’s streets were made of cobblestones. Concrete and asphalt now dominate road surfaces, but there are still a few streets that contain cobblestones, particularly SoHo. Whether you are looking to avoid them or experience a New York style Paris-Roubaix, this great link from NYC Bike Maps will help you find the remaining cobblestone areas.

SoHo extends from Houston Street on the north to Canal Street on the south, and roughly from Lafayette Street on the east to Avenue of the Americas on the west. In the 1600s, the SoHo-Cast Iron District was the site of the first free black settlement in Manhattan and retained a black population for more than 200 years, until the middle of the 19th century, when it changed from residential to commercial use. Today, this city’s most fashionable neighborhood has no shortage of trendy spots for shopping and dining, but careful explorers will find Soho’s true charm in the cobblestone streets, cast-iron architecture, and sweeping lofts and galleries.