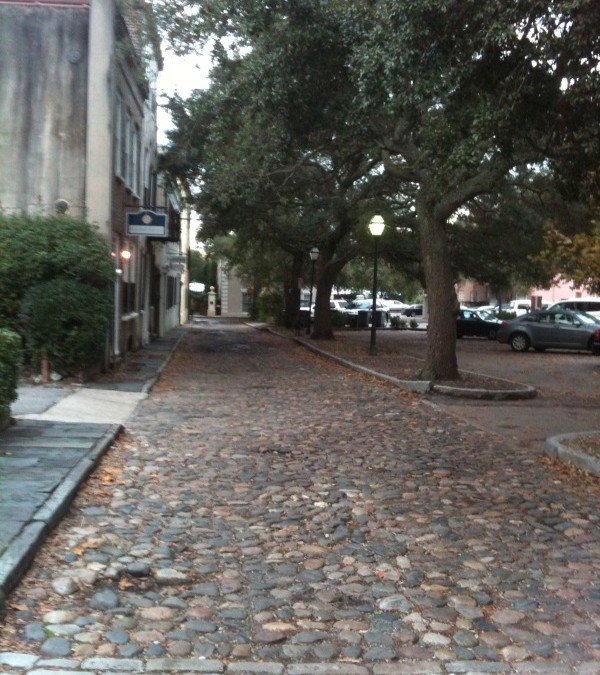 Cobblestone streets are everywhere here in the U.S.A., and Monarch Stone International found some very quaint ones in Charleston, South Carolina.

A quick search led me to “Explore Charleston“, a helpful website for visitors, along with a blog and photos from a local, Shady Home Journal  which has images and information about authentic streets in Charleston.

The  photo below was taken on North Atlantic Wharf Street. She believes these are not what one would consider a ‘true cobblestone’, but more probably old stones used as ballast in the ships from England of which would have been discarded upon arrival in Charleston to load the ships with cargo for the return voyage to England.  The frugal Charlestonians at the time ‘re-purposed’ these ballast stones into streets, which made for a smoother ride.

Indeed the word cobblestone comes from the blending of two words, cob and stone and originally referred to rounded river rocks used for street paving in very early times.  Rounded cobbles were not however, wheel or foot friendly, so eventually street paving evolved from the use of rounded river rock to hand ‘trimmed’ flatter shaped rectangles and squares that have been used all over Europe – dating back to Roman times. The word cobblestone remained the common word used to describe the size/type of stone material and today is used to describe both traditional rectangles and square shaped paving stone.

These Charleston ballast stones can be called cobblestones as they were hand pitched to rectangle shapes to begin with. Perhaps the masons in Europe knew they would be well suited to re-purposing even back then! The USA have plentiful streets on the east coast and port towns that are paved with these original ballast stones.

As the author commented, Charleston is not only known for its cobblestone streets…. but for its iron works, many churches, historical attractions and great food . Even Forbes magazine gives the town a huge thumbs up, and an award for being a top destination, paying homage to the charm of the cobblestone streets, horse drawn carriages all ’round the town, great local dishes at the many eateries and restaurants, as well as beaches, Ft. Sumter, Patriot’s Point, historic district and local shopping on King Street.