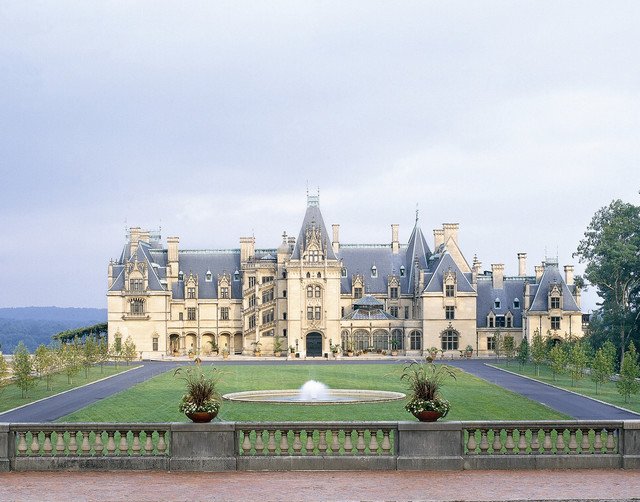 A great example of Chateau Architecture can be found at the Biltmore mansion. Commissioned by an heir of the Vanderbilt family around 1889, the astonishing 178,000-square-foot house with 250 rooms, situated near Asheville, North Carolina, is the largest private residence ever built in the U.S.

According to a recent study by the American Institute of Architects, its notable architect, Richard Morris Hunt, based the design upon French châteaus found in the Loire Valley. These 15th- through 17th-century country estates of the noble and royal classes, were a mix of late-Gothic and Italian Renaissance architecture that resulted in unique French Renaissance creations. Hunt’s interpretation incorporates numerous elements of the original French châteaus, with the parts organized into a fantastical and stunning architectural masterpiece.

The original château style developed around 1880, and homes were built in modest numbers, mostly in the northeast, for about 30 years. The style rarely reached other areas of the country in that time. It is likely that other examples were built through the middle of the 20th century, but late-20th-century home building booms produced both extravagant and more modest examples across the country.

Viewing from left to right in this photo of Biltmore, notice the elements that define the style. Most originals had heavy masonry construction, as does Biltmore, and were clad with natural stone and then topped with a steeply pitched hip roof further heightened with metal cresting.An elaborately detailed parapet-type dormer breaks the eave line, implying the attic story. Massive and detailed chimneys reach high to clear the steep and busy roof ridges. A flattened arch defines lower-level windows and arcades. The positioning and detail of ascending window forms reveal the location of the stairs.Gothic stone tracery defines primary openings surrounded by shallow relief carvings. Spires and pinnacles extend the building into a fractal finale.

Monarch Stone International is expert in architectural stone consulting and supply. For more information give us a call and you can also find more architectural information on AIA (The American Institute of Architects) and  Houzz.com